I love what I call "Playing in the land of the impossible" with God, you know, where people toss ideas and challenges they consider impossible and just walk away. "Nope, can't do that, it is impossible, everybody said so."

I know that, with God, NOTHING is impossible so I love going there looking for fun and exciting things to do just for the fun and the challenge of it. Just the thought makes my blood boil. There is nothing more rewarding than doing what others, especially x-spurts, consider impossible because they gave up before they asked God how to do it.

So, I find something others consider impossible, ask God how to do it, and go for it, baby. It is fun. Try it. It works.

This is a very good article I want to share with you here.

Know that, from the ashes of the nation we have destroyed with our sins, God will raise up a new and better nation to His glory. This new nation will be a Christian nation and a refuge for all persecuted Christians.

I have taught you these things before and will teach them again because they are true. To God be the glory.

Remember that I told you about the dream in which God told me that 80% of the members of our government, including the military, are good people and 20% are traitors?

Take a look at this picture of a West Point Graduate who is under investigation by the military because of this stupid picture telling the truth about him. 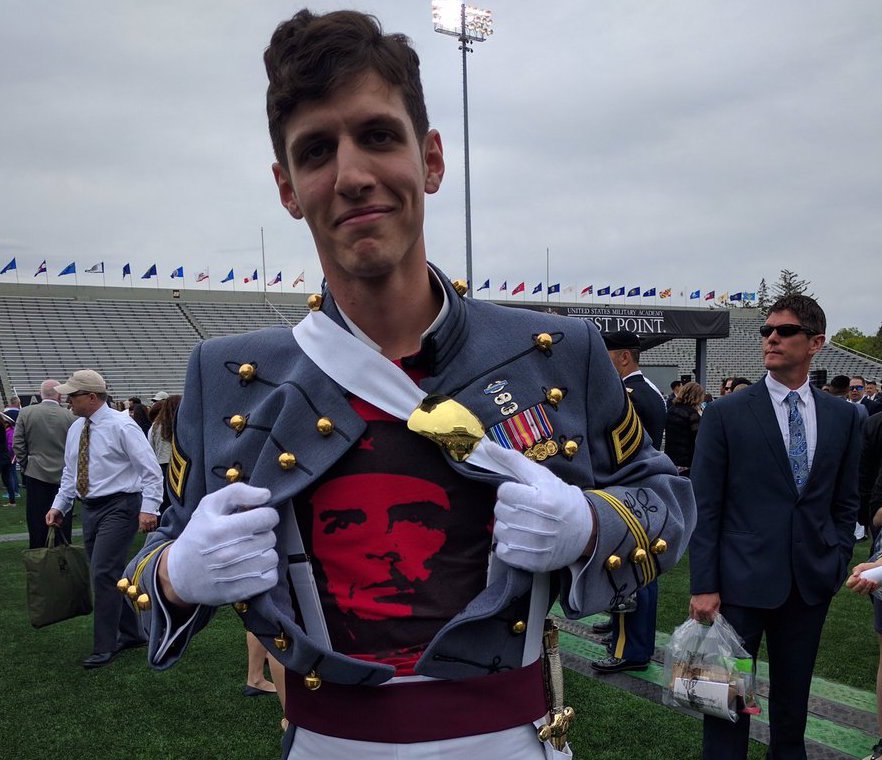 I got this picture and the following from SOFREP by Travis Allen:

"A graduate of the U.S. Military Academy at West Point and second lieutenant in the United States Army is now under investigation from the Army after pictures surfaced on the officer's Twitter page on Tuesday showing him displaying pro-Communist messages and imagery, to include while in uniform."

"But more details have emerged about Lt. Rapone's short time in the Army and his potentially conflicting political beliefs. This summer, while a student at Ranger School, Lt. Rapone reportedly clashed with his chain of command, repeatedly being disrespectful to senior NCOs and Officers, culminating in telling his Battalion Commander that he does not agree with the United States' military actions overseas.

Lt. Rapone's social media presence remains public and includes inflammatory political statements for a Commissioned Officer in the United States Army. He calls President Trump, officially his commander, a fascist. He says other military members 'lust for war and conflict. They fetishize violence.' He says West Point is a 'bastion of reactionary politics and imperialist violence.'"

Yet he calls a bloody and ruthless murderer, Che Guarvara, his hero?

"Oh, it's OK for us commies to murder everyone."

"Most curiously, one photo shows that he has written 'Communism Will Win' inside of his uniform hat before the graduation ceremony. Tradition at West Point has graduating cadets write inspiring words of encouragement, typically including money, and leaving them in the hat for the ceremonial 'hat toss.' Children then flood the field, collecting as many hats as they can. It can be inferred that Rapone intended for his message to be read by a child."

Nothing like a little commie infiltration in the military, you know, like God told me and I told you but, hey, God is right now working to purge them out of our military.

For those of you who want photographic proof that we really did land on the moon, you can go here.

There are pictures taken by a NASA satellite, Lunar Reconnaissance Orbiter (LRO), of the Apollo landing sites showing just about everything. There are tons of other great pictures there too. Yep, we really went there and the earth is not flat.

Just think, someday soon, we will have trips to the moon for tourists just like to the Grand Canyon. That will be fun.

I just hope that Trump is including in his wall seismic sensors to tell when someone is digging under the wall. That is the only way he will be able to stop the tunnels. He probably is including them.

Obama spent 8 years disarming the US Military and Trump is rapidly rearming it. He has already contracted with Boeing and Northrop Grumman to develop replacement ICBMs for the Air Force and General Dynamics Electric Boat to build 12 new nuke subs of the new Columbia class sub, the best subs in the world. This along with overhauling our current bombers to be able to carry better weapons including new nukes that will also soon be built.

Add to all of this that Trump is having the military openly build a new space force, something that started in the 1960s but was previously kept secret. And I was just being sarcastic when I used to called Obama, Obama Vader. Now it fits.

In just one year, Trump is undoing almost everything Obama did to tear down the US Military in 8 years. Trump is even putting Reagan to shame and that is a very good thing because we are going to need it soon.

Who is going to win the next war?

God, so it just might be a good idea to be on His side when the fighting starts.

And God said, "Do unto others what you would have others do unto you."

I guess He meant it.

With so many Antifa members being arrested and prosecuted for their violent crimes, Antifa is handing out notes at Berkley asking people not to take pictures of the protestors (read Antifa thugs). "Hey, don't take pictures of us committing crimes. We will go to jail."

Running a little scared, are we? Just a wee bit camera shy, are we?

It is about time.

They are also now organizing a boycott of the NFL for this coming Sunday, October 1, 2017. This will be interesting.

It seems that TV networks are now having to repay advertisers for declining advertising rates because of the increasing protests. This also means the football teams are losing money and will soon have to pay players out of their pockets or declare bankruptcy to force the players to renegotiate their contracts down.

Also some of the advertisers are pulling their adds costing the media and teams even more lost revenues.

They are all going to lose really big money on this. Hey, protest God's country and see what God does.

I get the feeling the idiots on the left are having a contest to see who can tick off the right the most and lose the worst.

Have you noticed that every time the left tries such crap, they lose big time? What, the idiots didn't learn from Hollywood waging war against the right and losing big bucks?